8 Stunning LGD 4033 (Ligandrol) Before And After Results With Pics

Are you ready to witness some real LGD-4033 transformations?

I will show you eight Ligandrol before and after results with pics that will blow your socks away!

This article will also present:

Let’s get the ball rolling!

Out of all the SARMs on the market, Ligandrol has the highest anabolic to androgenic ratio (500:1) and is a full agonist of the androgen receptor.

This tells us a few things:

First of all, Ligandrol is very potent, even at lower dosages.

Lastly, Ligandrol will provide you with amazing benefits, such as increased muscle mass, libido, strength and lowered recovery times!

Ligandrol has been a part of many human studies and dosages of up to 22mgs per day were used, with the subjects tolerating the compound very-well, with almost no side effects experienced.

Learn all there is to know about this SARM by reading my Ligandrol review.

LGD 4033 Results With Before And After Pics

I will now proceed to show you eight Ligandrol before and after results with pics.

I will also reveal their cycle and whether they used PCT or not.

While Ligandrol is a powerful SARM, you have to remember that a clean diet and good exercise are more than half the battle.

The eight people you are about to see have decided to contact me, expressing interest in sharing their LGD 4033 before and after results with my readers.

You can do so as well if you’re willing to share your progress with the world!

Looking at the before and after pictures, it’s clear as day that this person turned from skinny to ripped in just one cycle.

That’s the power of Ligandrol and proper dieting!

If I had to take an educated guess, he gained around 8 to 9 pounds of muscle mass, with the most pronounced areas being his biceps, arms, shoulders and chest area.

He didn’t do PCT and suffered the consequences later on, claiming to have experienced lethargy, depression, lack of energy and low libido.

I would strongly advice against skipping out on PCT while on higher dosages of Ligandrol.

Read my LGD-4033 PCT guide if you’re unsure whether you need it. 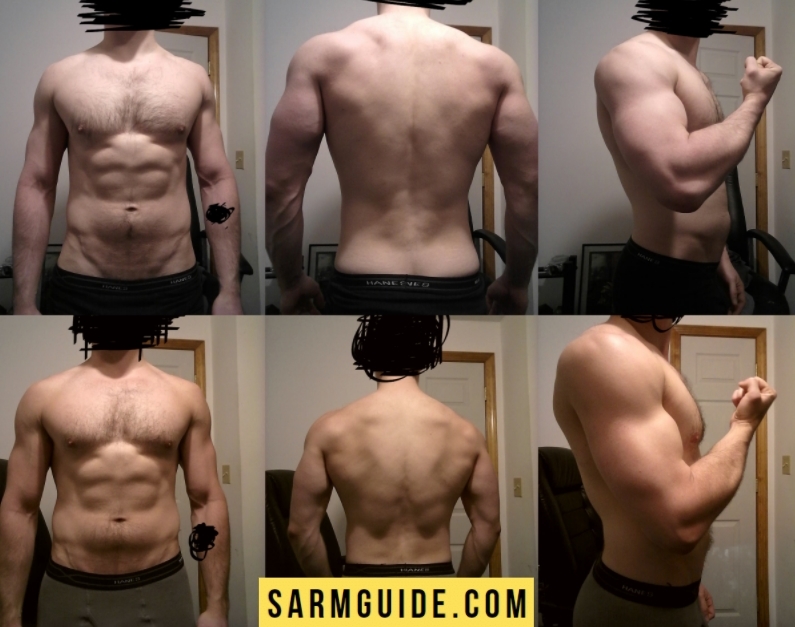 We can see a good increase in size, which is to be expected with Ligandrol. His six-pack remained pretty much the same, but other areas of the body have definitely improved, especially his shoulder width.

I actually had a chat with this person, and he claimed that Ligandrol made his strength go through the roof. He bested all of his personal records and continued improving upon them throughout the entirety of his cycle.

He says that the Ligandrol kicked in at around week two.

At around week six of his cycle, he started noticing the negative effects of Testosterone suppression, but he powered through.

Once he started taking Nolvadex, he immediately felt a relief in the negative symptoms experienced – not a month had passed, and he was back to baseline.

This is a very interesting bulk where the subject gained quite a bit of mass, but not all of it was muscle.

It’s pretty clear that some of the mass is nothing but water weight. This is due to the fact that both MK-677 and Ligandrol cause water retention.

Still, the gains he got are pretty impressive, especially when you look at his arms/biceps.

The increase in vascularity is also exemplary, shoulder width also experienced an upswing and lastly, his chest area has also undergone a complete transformation.

This is also a nice example of utilizing MK-677 as a PCT. 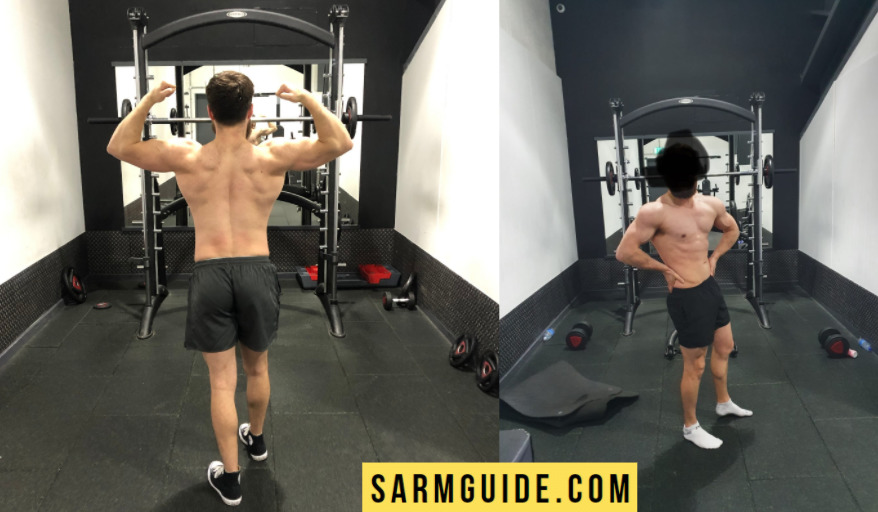 I think it’s pretty clear that we’re dealing with someone who has already lifted for a few years.

Despite that, in just eight weeks, this person has gained around 6 to 7 pounds of muscle mass and improved his physique substantially.

Look at how much more pronounced his back area is, almost like we’re talking about a different person altogether.

His biceps seem to have undergone a 20-25% increase which is decent.

Another area which has undergone significant improvement are his chest and stomach.

Considering the high amount of Ligandrol imbued, the four weeks of Nolvadex were more than necessary to offset the negative effects of Testosterone suppression. 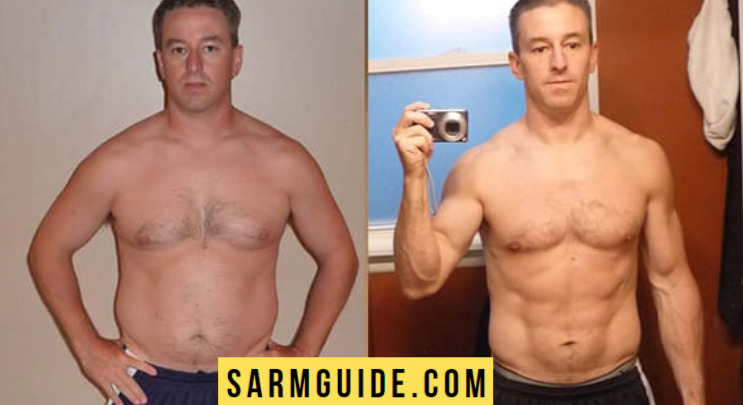 We see some decent gains here, I would even wager that the subject lost a bit of body fat due to the Cardarine.

The person in question gained at least ten pounds of weight, with most of it being muscle mass.

Vascularity has also increased, but it isn’t that noticeable as in some other samples.

Nice gains on the shoulders and biceps, chest area looks good too!

This is a typical beginner stack and shouldn’t cause much suppression to be experienced. The bodybuilder who took this stack didn’t see a reason for PCT, so he didn’t take it.

Side effects experienced were a bit of suppression coupled with some water retention. 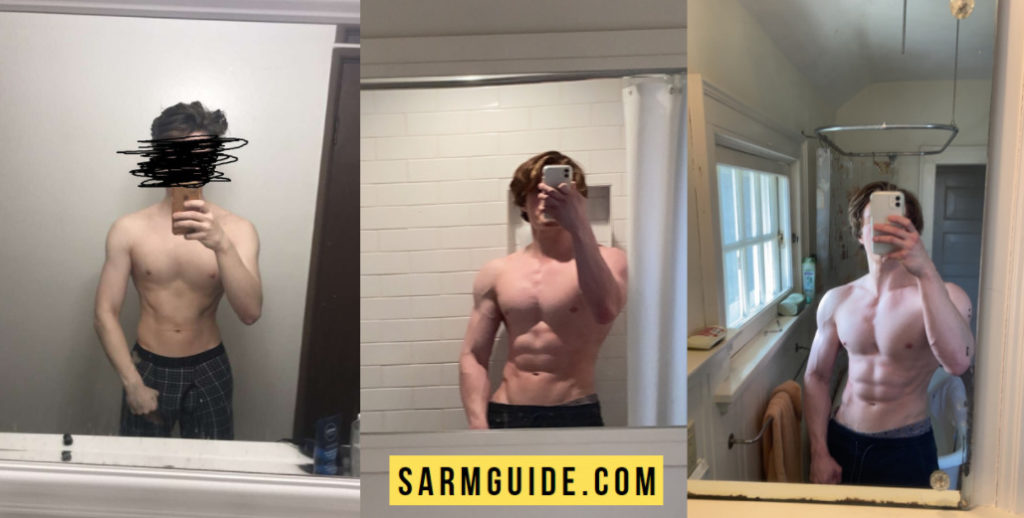 This person evidently has a shorter frame, but that didn’t stop him from completely transforming his body in just one cycle!

Just take a look at the difference in his neck area, he gained a solid pound just there.

Arms and biceps are also noticeably bigger, the vascularity serving as icing on the cake.

Overall, a great job by this young lad.

While I would never personally recommend going over eight weeks with Ligandrol, this person did it and didn’t suffer that many negative consequences.

Yes, the last two to three weeks were less than pleasant, but the gains accrued made up for it big time.

PCT is absolutely needed at such a high dosage and lengthy time period, so it’s good that he had the common decency to incorporate it into his cycle. 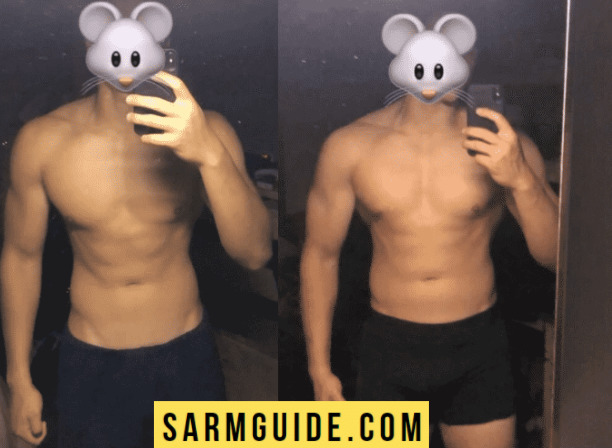 This is a great example of a non-responder. It’s rare, but there are people who simply don’t feel the effects of Ligandrol and there is nothing you can do about it.

Even though the chances of this happening to you are close to zero, I still wanted to include this sample to present a complete and accurate picture of Ligandrol.

All the gains this person made in his eight-week cycle could’ve been accomplished naturally, without any exogenous agents.

On the flip side, this person didn’t experience any side effects so at least he didn’t have to spend any money on PCT. 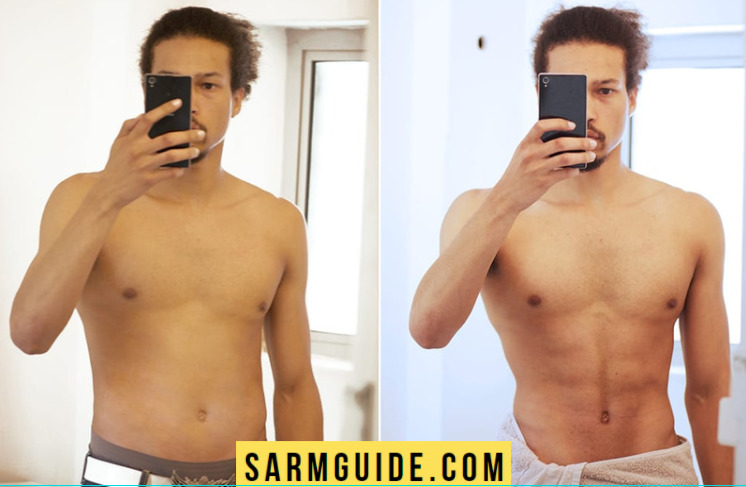 A very interesting transformation from this bodybuilder.

Using Stenabolic with Ligandrol is not something you’ll see very often, but it worked out perfectly for this person.

Notice the giant increase in shoulder width, arms and biceps.

His entire body looks more defined and if I had to be the judge of it, he gained around 10 pounds of muscle mass and lost around 2-3% of his total body fat.

PCT was still necessary, even on a 5mg dosage. That’s the thing with Ligandrol, it works well but it has its drawbacks.

Most noted side effects were suppression, low libido and lethargy.

A week into his PCT with Nolvadex, the adverse effects subsided, and it was smooth sailing from there on out.

I think that many of you are excited to see my Ligandrol before and after results, so let’s get started!

Before revealing my cycle, I just wanted to point out that I already have an eight-week Ligandrol log written!

I always err on the side of caution, so I take the lowest (effective) amount possible.

Note that 2,5mgs per day were used in studies and human trials, so it’s a very safe dosage that won’t cause any complications.

Once I started imbuing LGD 4033, I quickly noticed increased motivation in the gym, lowered recovery times and a giant upswing in libido levels.

I felt hung like a horse for the first six weeks!

I was bulking at that time and gained ten pounds of weight. Admittedly, not all of it was muscle mass, some of it was water weight, but I still felt like it was worth the effort.

Looking at my body, my shoulders and back widened, my vascularity increased by a bit, my biceps and triceps were looking swole and lastly, my neck area also improved.

I also gained quite a bit of strength, but it was not comparable to the kind of strength that I had while on RAD 140.

I did improve most of my personal records and that increased my confidence by quite a bit.

I didn’t experience any fat loss, but I didn’t gain any either, so it was fine by me.

Gaining 10 pounds of weight without increasing your body fat is a feat on its own, so I was quite content with myself.

Last but not least, I didn’t feel the need for PCT.

2,5mgs per day were not enough to suppress me and I was feeling alright at the end of the cycle.

All in all, Ligandrol is an awesome compound that helped me gain mass quickly and without issues.

I recommend it to anyone that has trouble gaining weight, as it will make you hungrier and willing to go all out in the gym!

Tips To Get The Best Results

If you’re after the best results out there, heed to following five points and you’ll be golden!

I know a bodybuilder that ignored #5 on this list, opting for a cheaper option to save a few bucks.

He ended up in the hospital and it was later found that the stuff he bought weren’t even SARMs in the first place!

We’ve seen eight Ligandrol before and after results with pics in this article.

The bodybuilders that have sent me their before and after pictures didn’t experience any bigger problems due to LGD 4033 consumption.

Studies only confirm this notion by telling us that the compound is tolerated very-well by all participants.

Provided you keep your diet and exercise routines in check, you too can accomplish these results with Ligandrol.

All in all, I wholeheartedly recommend this SARM to anyone looking to gain mass quickly!