After doing a few cycles on milder SARMs, like Ostarine and other compounds such as Cardarine (I also had a run-in with Stenabolic), a year and a half had passed, and I finally decided that it was time to join the big leagues.

My next compound to conquer was to be Ligandrol, known to cause mild suppression and water retention even at dosages as low as 1mg.

Naturally, I was a bit scared but also intrigued, as I never had experienced Testosterone suppression before in my life and that’s where I decided: In for a penny, in for a pound! 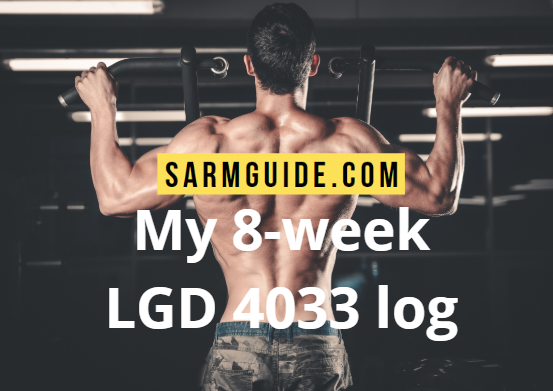 Personally speaking, I felt a bit underwhelmed with my physique and thought that a bulk on Ligandrol could fix things right up.

My maintenance was at 2200kcal, so I decided to eat 2700kcal for the next eight weeks.

I didn’t want to do PCT after Ligandrol, so I settled on a low dosage of just 2,5mgs a day.

I usually take my SARMs in the morning when I wake up, right before going to the gym and that’s just what I did on the first day.

Some people will tell you that it takes weeks for SARMs to work, but they are just spouting nonsense. While SARMs take time to break through the cellular wall of your androgen receptors, they immediately act on your central nervous system and muscle tension, leading to better workouts.

This is exactly what happened on day one of me using Ligandrol, I felt an amazing pump at the gym and was full of energy. If you’ve read my Ostarine log, you will have noticed that I psyched myself out as it was my first experience with SARMs.

This time, it was different. I was feeling minor excitement and not much anxiety at all, but still experienced an improved workout session, right on day one.

The first side effect started showing. I felt lethargic from day four up until day ten for some reason. I would be full of energy while in the gym, but at home, I would just be a lazy slouch, barely able to lift a finger. It was especially pronounced during mornings.

I didn’t quite understand why this was happening to me, but I managed to power through it and luckily, I didn’t feel any lethargy until the end of my cycle.

During this time, I improved my bench press and my deadlift, both by a measly five pounds, but it was a start.

By day fourteen, I broke my personal record at the squat rack, which made me very proud of myself.

My power and strength went through the roof! If I had a good pump at the gym up until now, what I was experiencing at this point was something extraordinary.

I was sweating like crazy, but with so much vigor in my lifts, I felt as if I could conquer the world.

My confidence and assertiveness shot up, my libido also increased, and I was consistently waking up with morning wood, which is something I couldn’t complain about.

My body fat percentage stayed on the same level, but I had gained four and a half pounds of muscle mass during this time period.

I broke several of my plateaus, especially at the dreaded bench press, where I was stuck at 250 pounds for months. I was now lifting 260 pounds, five times, without a hint of a problem.

Also, my deadlift improved significantly, with me now being able to lift 15 pounds more than before.

I felt myself training a lot more intensely on the same workout routine I always do. I was still brimming with energy and stamina.

Since I was religiously looking after my diet, I didn’t experience any water retention.

Added another five pounds on my bench press and deadlift.

It just feels amazing going to the gym and making progress every week you’re in. The feeling is just indescribable, I felt like a newbie chasing his first gains.

Gained another two and a half pounds of muscle on top of everything, my shoulders looked wider and my back felt fuller in the mirror.

Motivation for lifting was at an all-time high.

The first signs of suppression started showing. My libido was negatively affected, but I could still perform in bed. No other side effects were noted during the suppression, which led me to believe that it was mild in nature, since I was only running 2,5mgs.

It was at this point that I regretted not doing my blood work before and after the cycle, as that could have given me specific insight into my suppression and help me understand just how much my total/free testosterone had changed.

I also measured my body fat again and it turned out that it only mildly increased by 0,5%, for a total of 11,5%. This was a good sign, as I had gained around ten pounds of weight and evidently, most of it was muscle.

Motivation in the gym decreased a bit, and I didn’t feel the same pump as before. Vascularity was a bit more pronounced, but it was nothing worth bragging about.

The real deal were the strength and muscle gains and as that was my initial goal with Ligandrol, I was more than satisfied at the end of the eight-week mark.

Ligandrol is no joke and I wholeheartedly suggest that you read up on it before you even attempt to buy it, much less take it.

All in all, I’ve gained around eight pounds of muscle mass and quite a lot of strength. During the entire cycle, I stuck to my diet without indulging in any cheat days, which definitely helped.

I was quite happy to realize that despite putting on ten pounds of weight, I only gained a measly 0,5% in body fat.

I also didn’t experience any joint pain, which was probably due to the increase in bone density the Ligandrol bestowed me with.

After the cycle, it took about a month for my libido to reach normal levels again and I felt completely fine after that.

Judging from my experience, I do recommend Ligandrol, as it helped me achieve new heights in bodybuilding without breaking a sweat.