In this article, we will discuss using MK 677 as PCT.

MK 677 has been lauded by the bodybuilding community for its awesome effects at building muscle mass, providing you with better sleep and increasing the quality of your hair, skin and nails.

Some people have even started using it as a PCT supplement, but how did they come up with that idea? 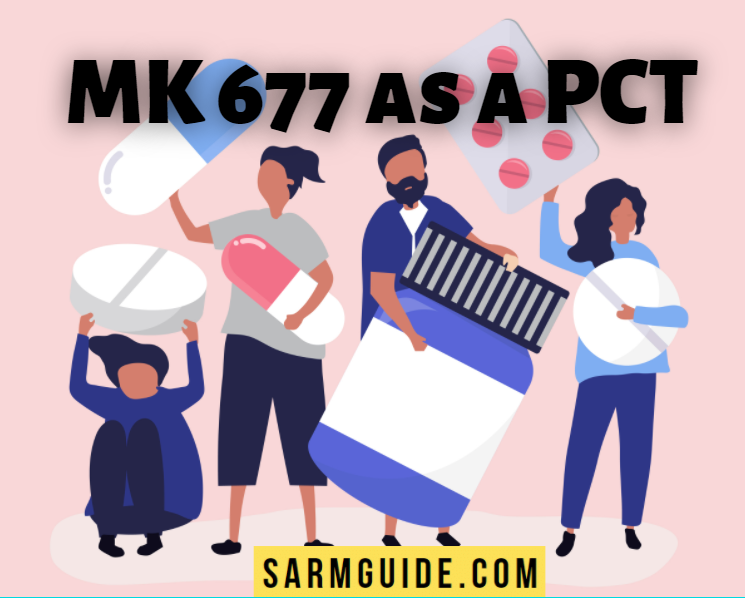 To answer that question, we’ll first have to learn a bit more about MK 677, and later on, I’ll even show you how to do a PCT with it and I’ll also reveal the best vendor to buy it from.

MK 677, also known as Ibutamoren is a growth hormone secretagogue, which means that it increases the production of the naturally occurring HGH (Human Growth Hormone) in our body.

Besides that, it has also been shown to act on ghrelin, which controls many important functions in our body, such as hunger, sleep quality and the release of the growth hormone.

Additionally, MK 677 increases IGF-1 levels which have been shown to promote the creation of new muscle mass, and most importantly, it performs that action without affecting cortisol levels.

Ibutamoren is usually consumed orally as it has high bioavailability. Moreover, it’s tolerated quite well and its safety profile has been evaluated in multiple studies.

Now that we know a bit more about MK 677, let’s take a look at its efficacy as a PCT supplement.

There are several reasons why MK 677 is being considered as an alternative to standard PCT supplements such as Nolvadex or Clomid, one of them being the fact that it has fewer side effects than standard SERMs.

Also, it can be used for longer as it doesn’t suppress Testosterone or Estrogen levels. Many people perceive Estrogen in a negative way, but low Estrogen levels can also be detrimental to the body.

Regular PCT is only used for four weeks and if you’re not fully recovered by then, you’re out of luck.

Conversely, I have heard of people taking Ibutamoren for years as a general sleeping aid, without experiencing any side effects whatsoever.

While MK 677 doesn’t directly promote muscle growth like other SARMs, studies have shown that people who were taking 12,5mgs of Ibutamoren a day for 16 weeks gained two pounds of muscle mass, without any training whatsoever.

This means that you’ll be able to preserve all of your muscle after a SARM cycle!

So why aren’t people just taking Ibutamoren instead of PCT altogether?

The fact of the matter is, Ibutamoren is weaker than traditional PCT supplements and it’s a big question as to whether MK 677 would work for PCT if you were using SARMs like S23 or YK11.

The most common example of a MK 677 PCT protocol will be shown in the following table:

You should start taking Ibutamoren from the beginning of your SARM cycle, it will not interfere with the workings of the SARM in question. Moreover, it will actually help with muscle growth and bestow you with an even better cut, bulk or body recomp.

I personally don’t recommend the usage of MK 677 while cutting, as it increases hunger quite a bit, but if you can handle it, go for it!

You don’t have to stop taking Ibutamoren at the sixteen-week mark, but it is recommended that you cycle it off a few weeks in a six-month period, as to avoid the appearance of some side effects associated with MK 677 use.

We’ll talk more about them in the next chapter of this article.

MK 677 has quite a few side effects, but most of them can be mitigated with ease and if you stick to my dosages and cycle lengths, you really shouldn’t have to worry much.

Here are some of the most common side effects of MK 677:

I’ve linked some of the articles I’ve penned on these adverse effects, so if you’re interested in learning more about them and how to lessen their effects, follow the links outlined above.

I usually buy my MK 677 at science.bio (use the code sarmguide10 for 10% off), since they are quite cheap and have extensive quality control over the products they sell.

If you choose their powder, you get 1000mgs of pure Ibutamoren for only fifty dollars.

However, if you opt for their liquid, you receive 750mgs of MK 677 for the same price as the powder.

I usually buy their liquid since it’s easier to measure and it usually lasts me for around a month.

That’s less than 2$ per day, which is a good deal.

As we’ve seen from this article, MK 677 can be used as a PCT after SARMs, but I personally would take a real PCT like Nolvadex or Clomid after a heavy SARM cycle.

We must remember that MK 677 can’t really be compared to a real SERM and that the latter will always work better and faster than the former.

All in all, MK 677 is great aid in battling suppression from SARMs like Ostarine, Andarine, Testolone and Ligandrol.

Just remember to take it in a 20mg dosage per day and you should be golden!