In bodybuilding, as in life itself, injuries and pain unfortunately play a common role, hindering individuals from reaching their full potential. 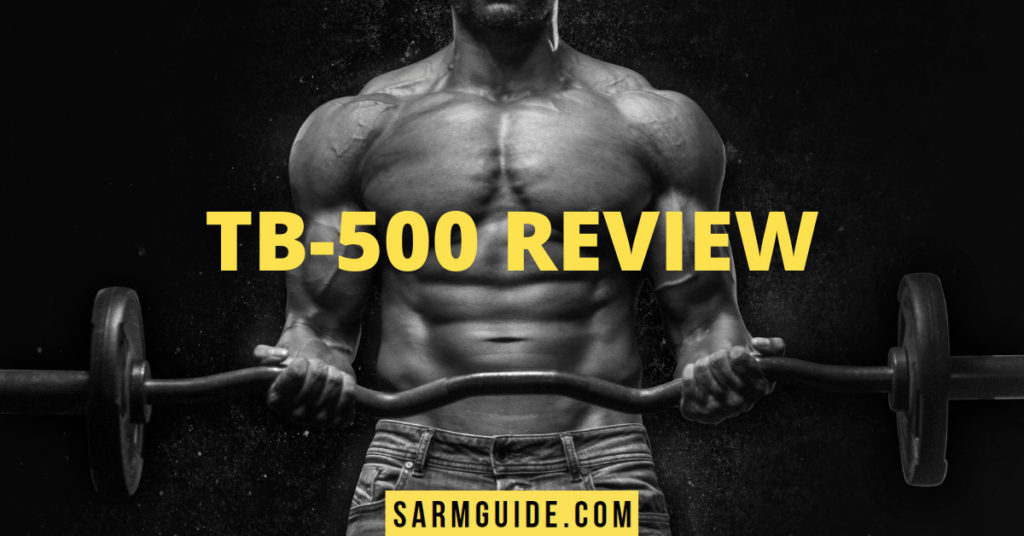 Today, we’ll be doing a TB-500 review, where we’ll explore this quick-healing peptide and tell you:

Remember when you were a child, you would fall down and scrape your knee; the next day, the injury would be gone!

This is due to a protein in our body called Thymosin Beta-4, produced by the thymus.

It’s also called a BRM (Biological Response Modifier) because it modulates how our body responds to wounds and outside agents through the immune system.

There is no denying it, once you hit your 30’s, Thymosin Beta-4 production in the body drops significantly and pain and injuries start affecting you much more severely.

Enter TB-500, a synthetic version of Thymosin Beta-4, a peptide chain responsible for mimicking the effects of the protein above.

Discovered in the 60’s and first used on a human being in 1974 (a woman nonetheless), it has been studied for a long time, although actual human research is lacking.

TB-500 is speculated to be even stronger than Thymosin Beta-4 in its mode of action, owing to LKKTETQ, which is a key segment of TB-500 responsible for its benefits.

Another explanation is its low molecular weight, allowing for faster travel through the body.

The first one would be increasing levels of actin in the body.

Actin is an essential component of every cell in your body and participates in cell motility, division, signaling and shape.

It basically plays a role in the structure of new cells, helps them move around faster and determines their form and function.

Actin also plays a key role in our muscle fibers, especially when it comes to muscle contraction and relaxation.

The two main cells affected by actin are our skin and blood cells, which explains the healing effect TB-500 has in the body.

Just like BPC-157, TB-500 promotes angiogenesis, which is considered to be essential for the formation of new blood vessels.

Not just that but angiogenesis is even being looked at as a tool to fight cancer and piqued the interest of scientists when it comes to dealing with cardiovascular disease.

It is a shame that it has been more than 45 years since the first human tried TB-500, yet the FDA has made no progress in approving this peptide for human consumption.

Scientists are partly to blame for this too, as TB-500 research on humans is non-existent and explicitly reserved for horses.

The company behind TB-500 actually markets this peptide as a ‘horse healer’ and it is not recommended for human consumption.

However, this doesn’t mean that you can’t purchase TB-500 online for ‘your horse’ or for research purposes.

You don’t need to worry about the legality of purchasing TB-500 if you’re using one of the two reasons above.

In short, you can buy TB-500 without worry but you have to have the ‘right intentions’.

Here’s where a lot of irony comes into play; apparently, this untested peptide is banned by ALL sports organizations, including the WADA, USADA and ASADA.

If TB-500 doesn’t work and is ‘unsafe for human consumption’, why did its consumption become so widespread among athletes that the WADA had to step in and completely prohibit its usage?

Because it works wonders on wound healing and gives athletes who use it that much of an edge compared to those that don’t.

If you’re an athlete or are competing professionally, don’t use TB-500 as it has a long half-life and you won’t get away with it; they have perfected methods of finding it in the body.

Just like CJC-1295, TB-500 is crammed under ‘S2’ in WADA’s prohibited substance list, along with other peptides and similar compounds.

If you thought that the applicability of TB-500 was strictly reserved to wound healing, you would be sorely mistaken.

Let’s take a closer look at the top five benefits of TB-500!

If you’re a bodybuilder on PEDs, this might be a particularly interesting benefit of TB-500.

Even if you’re not, hair loss is becoming an increasingly widespread issue for both genders and TB-500 can help out.

While scientists were studying rats who’ve suffered skin wounds, they unexpectedly stumbled upon hair growth in mice treated with the compound.

After the observation was confirmed, the researchers proceeded to shave mice and apply Thymosin Beta-4 topically.

Positive results were observed after just seven days, the mice were treated for an additional three weeks and no adverse effects were noted.

We’re living in a world where the new virus actually affects brain function and cognitive skills.

Now more than ever is the time to take care of the most important organ in the body, your brain.

TB-500 has been shown to stabilize BBB (blood-brain barrier) function, which led to less cognitive decline and prevention of neurodegenerative diseases.

One way TB-500 promotes wound healing is by creating new blood vessels in the process of angiogenesis, which we mentioned earlier.

It has also shown itself to act as liver support, promoting blood flow through the liver, thereby helping patients suffering from liver fibrosis.

In a study done on injured rats, damage from oxidative stress and free radicals was prevented by the use of Thymosin Beta-4, inflammation was also much less pronounced compared to the control group.

The key term to remember here is a term called autophagy, a process by which degraded cells are flushed out of the body and replaced by newer, healthier cells.

TB-500 prevents inflammation by promoting autophagy in the body.

Since autophagy also promotes homeostasis in healthy cells, it’s seen as a preventative measure in neurodegeneration and cancer.

The exact process by which TB-500 does all these things is still unknown but scientists believe it has to do with activating DAPK1 pathways.

DAPK1 is a protein enzyme responsible for regulating cells, both their emergence and their programmed death.

Heart disease is the number one killer in the world and accounts for 1 in 4 deaths in the US.

It even stimulates vessel growth and prevents the death of healthy cells in the heart.

It’s a tragedy that over 45 years have passed since TB-500 was first used and no human study ever mentions any dosages or appropriate cycle lengths.

Luckily, we have anecdotal reports dating as far back as the 80’s, when peptide usage wasn’t prohibited.

According to that data, TB-500 should be dosed once a week and the recommended dosage is anywhere between 1 to 8mgs.

From personal experience, we believe that the best dosage for newcomers to TB-500 would be 2mgs per week.

It’s a safe and effective dosage that shouldn’t produce any side effects.

If your pain or inflammation is chronic, feel free to take up to 5mgs per week but don’t go over that amount, as some people did report adverse effects at higher dosages.

Some anecdotal reports mention ‘loading’ and ‘maintenance’ phases but that’s not necessary and could lead to overconsumption, especially in first-time users.

TB-500 should be used for eight to twelve weeks and discontinued for at least a month, before starting a cycle again.

This ensures that you avoid dependency and the cumulative effects of TB-500!

Since no human studies mention the half-life of TB-500, we have to assume it to be seven days or longer, at least that’s what the anecdotal reports say.

There is one study that looked at the half-life of injectable Thymosin Beta-4 and they have determined it to be 14 days.

The lack of legitimate human studies severely limits our knowledge about all the potential side effects of this peptide.

When Thymosin Beta-4 was injected into humans, little to no side effects were found but it’s questionable whether the same applies to TB-500.

Here are the most common side effects of TB-500 according to anecdotal reports.

Most commonly experienced a short time frame after injection, they go away on their own and no outside intervention is needed.

Also, nausea is not unexpected, so ensure that you’re not operating any heavy machinery after your TB-500 injection.

This has only been tested on obese mice but is still included in the article as a safety precaution.

Perform a lipid panel once a month after you start your TB-500 injections to ensure everything is in order.

You will usually experience them around one to two hours after injection. They are uncommon but still happen to some people, so be prepared.

You don’t need to do anything special, just ensure that you’re in a safe environment and it will pass within a day.

We still don’t know the full range of side effects of TB-500, because of under testing and underreporting.

Both of these synthetic peptides are known for promoting healing all around the body.

However, there are some differences between the two.

The first fundamental difference would be their half-life, BPC-157 is known for its low half-life and one has to imbue it up to three times a day to get the full range of effects.

On the other hand, TB-500 has a half-life of at least seven days and is administered once weekly.

Another difference would be their mechanism of action; TB-500 promotes cell regeneration through increased actin function, while BPC-157 mainly works by blocking 4-Hydroxynonenal.

They do share a common trait and that is angiogenesis.

Regarding potency, we would say that both peptides are somewhere in the same ballpark if taken as prescribed.

Their benefits might be similar but they do have some unique traits of their own.

All in all, both of these compounds are potent peptides and are great at healing and rejuvenation.

One would think that the most logical route of obtaining TB-500 would be straight from the company that produces it.

However, that is not the case for several reasons.

First of all, the company that makes it is known for doing background checks on their customers; unless you own a couple of horses, they won’t sell TB-500 to you.

If you think you can outsmart them by saying you’re a research company, be prepared to be asked for credentials as well as proof of address for your supposed laboratory.

Last but not least, the company doesn’t ship internationally which means that some customers will be excluded from the start.

There is no need to fret, as there are legitimate peptide vendors out there that sell 100% pure TB-500, you just need to know the right sources.

The good news is, our recommended list of peptide vendors contains the absolute best TB-500 sources on the market.

Not only are their products pure and lab-tested, you won’t need to jump through any hoops to buy your desired research chemicals.

If this TB-500 review has taught us anything, it’s that human research and scientific funding are seriously lacking when it comes to peptides.

It’s much easier (and more profitable) to get people hooked on painkillers, rather than provide a relatively safe and effective way to get rid of pain and suffering.

To sum up, TB-500 has been used for over 40 years and nothing bad has happened to anyone using it. It’s safe, well-tolerated and very efficient.