In this article, we will go over:

The recommended MK-677 dosage is anywhere between 10 to 50mgs per day and that was also the range of dosages used in human trials. 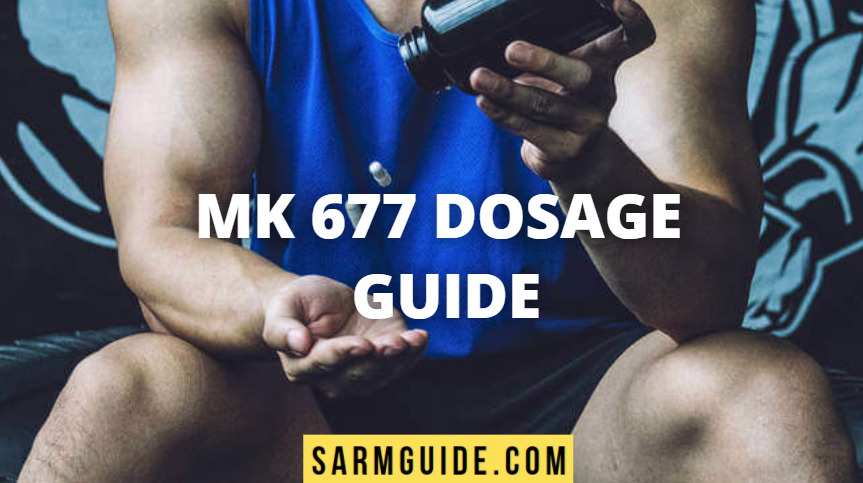 Speaking of human trials, MK-677 is researched quite well and there is a lot of data available for those curious about its benefits and long-term effects.

When it comes to the perfect MK-677 dosage, we have more than enough research backing the compound telling us that it’s somewhere around the 25mg mark.

This means that MK-677 forces the pituitary gland to secrete more of the growth hormone into the body.

In return, this leads to a myriad of positive effects to be experienced, such as increased muscle mass, better sleep, increased longevity, increased energy…

Besides GH, Ibutamoren also increases IGF-1 levels in the body, which have been shown to have a positive effect on healing bones and ligaments.

If you want to read more about this compound, please check out my thorough MK-677 review.

The half-life of MK-677 is only around five hours.

Fret not, for the thing that we’re really after, IGF-1 levels, remain elevated throughout the body for up to 24 hours after MK-677 ingestion.

This means that taking it once a day is more than enough to keep receiving the benefits that we’re after.

Many people like to debate whether it is best to take your MK-677 dosage in the morning or at night.

I personally believe the best time to be at night, for reasons outlined in the article above.

What’s very important to note is that MK-677 has been tested on over 1000 human subjects.

People from all walks of life were part of these trials and even children deficient in GH have shown great results with Ibutamoren.

The great thing about Ibutamoren is the fact that its very well tolerated, even in high dosages and for lengthy periods of time.

The most common dosages used in studies and human trials were between 10 to 50mgs per day, with the median average and most frequently used dosage being 25mgs per day.

At the 25mg dosage, some side effects were noted, including increased anxiety, water retention and headaches, but the researchers didn’t stop any of the experiments as the adverse effects were never severe enough to cause a disruption in the subject’s life.

Interestingly enough, when pitting the 10mg and 50mg dosage against each other, little difference was discovered between their effectiveness in increasing GH/IGF-1 levels.

After a lot of trials and testing, researchers determined that any dosage above 25mgs a day exhibited diminishing returns, meaning that 25mgs a day is the sweet spot which we should be aiming for.

The longest study performed with MK-677 lasted for two years and no significant side effects were noted even though the subjects were above the age of 60.

Some people are leery of taking MK-677 since they’ve read that increased IGF-1 levels can lead to a higher chance of developing cancer later on in life.

This is an understandable concern and one that I shared myself when I first started researching the compound.

Luckily for us, long-term studies have shown that there is nothing to worry about and that the only real concern is for those people who already suffer from cancer.

The safety of Ibutamoren has been proven time and time again, so there is little room for doubt.

MK-677 is a versatile compound and has high synergy with virtually any SARM out there.

I personally like to combine MK-677 with LGD-4033, as that stack provides you with a heap of benefits and if you follow my recommended dosages, you won’t even have to do PCT!

Example of a bulking cycle:

The reason behind taking MK-677 for an additional eight weeks is because we’re essentially utilizing Ibutamoren’s power as a PCT supplement!

This means that we’re not risking any of the side effects usually associated with SERM usage.

I would really advise against using MK-677 as a cutting supplement, as the increased hunger you feel on it is quite pronounced.

Even if you do take it 10 minutes before going to sleep, in a caloric deficit, it’s questionable whether your sleep will be negatively affected by the gnawing hunger pangs.

While Ibutamoren does improve sleep quality, it cannot help much against cravings for food – it exacerbates them in the first place.

I think it’s futile to even attempt to cut with this compound, as it simply wasn’t designed for that task.

People that still want to try it out aren’t that off the mark, since MK-677 has anti-catabolic properties which help preserve muscle during a cut.

It’s just that there are so many other, better compounds for that job, like Ostarine.

The most likely type of MK-677 you’ll be using will be in liquid form.

The text below doesn’t apply if you’re using MK-677 pills or capsules.

As we all should know, vendors measure liquids in milliliters (mL) which are part of the metric system.

You can’t just blindly assume that a mL of MK-677 has a certain amount of grams in it, you have to carefully read the label on the compound.

For example, Sports Technology Labs, one of my recommended vendors, sells MK-677 that contains 25mgs per 1mL of MK-677. This means that measuring out 1mL with a dropper and consuming it will be enough to cover your daily MK-677 dosage.

Make sure to use the discount code sarmguide15 when buying from Sports Technology Labs to get the most value out of your purchase. That discount code is the biggest possible discount for their website.

The safety, effectiveness and pharmacokinetics of MK-677 have all been determined to be more than acceptable in numerous human trials.

Researchers never cited an ideal MK-677 dosage, but preference was given to 25mgs per day as it yielded the best results while exhibiting minimal side effects.

This means that 25mgs a day should be our goal, since the difference in adverse effects between 10mgs a day and 25mgs a day are minimal.

It is only after you breach the 25mgs per day dosage that you put yourself at risk of more severe adverse effects, at least that’s what the research shows.

What MK-677 Dosage Should I Take

Even if you’re just a beginner to MK-677, 25mgs per day will not cause you any trouble, since most research subjects participating in studies and human trials took the exact same dosage for the first time without any issues.

I think it’s pretty clear from the text above that my recommended dosage is quite obvious: 25mgs per day if you’re a male.

However, if you’re a woman, I would suggest starting off with just 10mgs per day.

This advice highly depends on your stature and weight, if you’re of a sturdier build, nothing should prevent you from taking 25mgs per day right off the bat.

The same thing applies to males, if you’re under 150lbs and on the shorter side of the equation, there is no shame in starting off with 10mgs per day.

You can always increase the dosage to 25mgs per day later on.

At the present moment, MK-677 is probably the best compound for increasing GH and IGF-1 levels on the planet, even better when compared to HGH itself!

Dosages up to 50mgs were used in human trials and people tolerated them quite well.

However, a dosage of 50mgs per day led to an increased risk of side effects and is just one of the reasons why 25mgs per day is preferred.

The second reason is because 25mgs per day is the most researched dosage till date, and it should only be natural that we choose that dosage for ourselves.

Remember to cycle MK-677 once in a while and purchase it from a reliable source which you can trust!