GHRP-2 is a very interesting compound, it’s basically fresh on the market and many compare it to the similarly named GHRP-6. 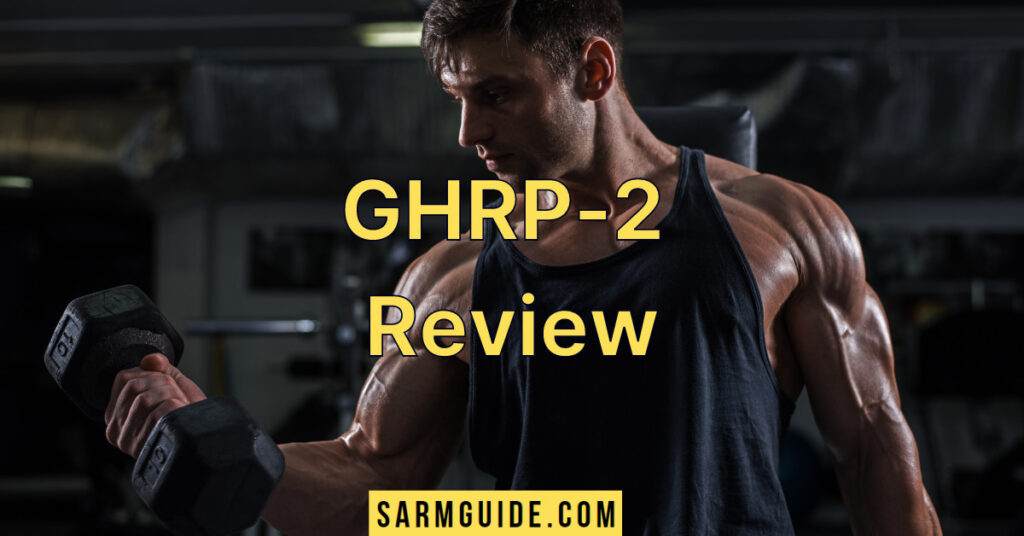 If you’re looking for ways to increase mass, sleep better and improve your overall body composition, then GHRP-2 should be considered.

In this GHRP-2 review, I’ll be showing you:

This peptide drug has been used for safe assessment of GH deficiency and it even had some phase II trials for treating short stature.

This is important because OGFs have very low bioavailability and last a very short time.

The question is, does GHRP-2 improve on these shortcomings and if yes, can we expect opioid-like effects from GHRP-2 consumption?

Unfortunately, the answer is no but GHRP-2 does have some other interesting benefits which I’ll explore in a subsequent chapter.

As the name implies, GHRP-2 binds to the growth hormone secretagogue receptor, acting as an agonist.

Since GHRP-2 is a synthetic agonist of ghrelin, it induces hunger in the subject and secretes growth hormone (GH) on a supraphysiological level.

GHRP-2 is known as a “second generation” GHRP, since it releases more GH in the body, while inducing less hunger than its predecessor, GHRP-6.

While most effects of GHRP compounds have been studied on animals, GHRP-2 is one of the few that has an actual human study behind it.

Not just that, they also consumed 35.9% more calories compared to baseline.

This tells us that GHRP-2 might be a valuable tool for bulking in bodybuilders.

However, the study presented above has some limitations; small sample size being the most obvious.

GHRP-2 and similar synthetic peptide drugs are all banned on both the WADA and USADA lists of prohibited substances.

This means that taking GHRP-2 if you’re actively competing or are an athlete will more than likely lead to a full exclusion from all tournaments.

Take the example of Chad Mendes, who received a two-year suspension for abusing GHRP-6.

Other than that, if you’re a regular bodybuilder, GHRP-2 is appropriate as long as you buy it as a research chemical.

Nowadays, it’s quite easy to get your hands on real GHRP-2 via the power of the internet.

At the end of the article, I will show you my favorite GHRP-2 sources!

GHRP-2 is still quite new and doesn’t have a lot of research behind it.

The one human study you saw featured before simply isn’t enough to warrant its usage.

However, if you’re open for experimentation, here are the benefits you should expect from GHRP-2.

Many anecdotal reports claim that they’ve had “the best sleep of their lives” after administering GHRP-2.

The good news is that GHRP-2 doesn’t have a loading phase, which means you’ll notice its effects soon after injecting.

While there are no studies supporting these claims, one paper looked at GHRP-6 and its effects on sleep.

The study concluded that GHRP-6 had the ability to enhance non-REM sleep.

When you consider GHRP-2 is basically an improved version of GHRP-6, one can see how the effects translate from the latter onto the former.

Please note that you won’t necessarily gain muscle mass from GHRP-2; it doesn’t have anabolic effects in humans.

What will surely happen is increased hunger and subsequently, increased food consumption.

Sometimes, this can lead to unpleasant outcomes; if your diet is bad, you’ll not only increase the risk of gastric motility but also increase the chances of diabetes and so on.

You need to pre-plan your meals and be ready for hunger pangs in advance.

To conclude, GHRP-2 enables those that have problems gaining mass to do just that.

However, what type of mass it will be is entirely dependent upon you.

GHRP-2 does improve recovery times but it’s nothing significant.

No studies looked into this supposed benefit but many bodybuilders did report it after GHRP-2 administration.

Take from that what you will.

Many bodybuilders praise GHRP-2 for its ability to reduce fat in critical areas of the body.

Even while in a caloric surplus, you will lose fat around the face, midsection, calves, etc.

This is due to lipolysis, a process where triacylglycerols, through which fat is stored in the body, are broken down to simpler molecules.

This has been confirmed in the following study.

It’s only natural that GHRP-2 improves skin health, since it releases GH, which is known to affect skin tissues in a positive way.

Although there’s limited research in support of these claims, almost every bodybuilder out there speaks about the positive effects of GHRP-2 on their skin.

Less wrinkles, tightened skin and a sort of “glow” are just some of the benefits of GHRP-2.

The most common GHRP-2 dosage is between 100 to 300mcg per injection.

This means that you’re spending anywhere from 0.5mg to 1.5mg of GHRP-2 per day, given a five time injection protocol.

Given the fact that 5mgs of GHRP-2 costs around 20$ in most stores, you’ll be spending between 2 to 6$ on this peptide alone.

Granted, it’s not a lot of money but what I’m really concerned about is the frequency of injections.

More on this later.

According to experienced bodybuilders, a 150mcg dosage per injection feels just right and hits the sweet spot.

Beginners are advised to start with 100mcg per injection and see how their body reacts to the peptide.

One thing to keep in mind is that you have to dissolve the GHRP-2 you buy using bacteriostatic water.

Some vendors automatically add it during checkout, with others you’ll have to do it manually.

One reason why GHRP-2 is a bit of a pain in the neck is its absurdly low half-life of just 30 minutes.

According to the study above, peak GH levels are reached 15 minutes into injection.

This means GHRP-2 has to be taken several times per day to be effective.

I’ve heard of people injecting up to five or even ten times per day, which is just ridiculous and a possible health hazard due to infections.

The most concerning thing about GHRP-2 isn’t the peptide itself but the possibility of unintentional self-harm due to injection frequency.

I’m talking about pain, tenderness, swelling, redness around the area and so on.

In itself, this doesn’t present a problem but given the fact that you have to keep injecting to enjoy the effects of GHRP-2, you’re not giving your skin enough time to recuperate.

This can exacerbate the effects mentioned above.

Not to mention that you’ll most likely not be under medical supervision during injecting, which may lead to additional injuries.

The real side effects of the drug boil down to hot flashes and sweating, nothing particularly concerning.

You’ll often hear people claim GHRP-2 to be the superior peptide but I beg to disagree.

They both have their strengths and weaknesses; for example, GHRP-6 is better if you have trouble gaining weight.

On the other hand, GHRP-2 releases more GH in a shorter time period compared to GHRP-6.

GHRP-6 has a longer half-life than GHRP-2 and therefore doesn’t need to be injected five times a day to feel the full effects.

GHRP-2 is only considered more potent given the fact it releases a high amount of GH but that’s offset by its short period of duration.

Last but not least, GHRP-2 is often touted as a much safer compound side-effect wise.

This is correct if you only take the effects of these two peptides into consideration; GHRP-6 may increase prolactin, cause water retention and gastric motility.

However, when you consider the risks of amateur bodybuilders injecting GHRP-2 five or more times per day, things become murky.

Where to Buy GHRP-2

GHRP-2 is quite cheap when you compare it to other peptides and SARMs.

As previously stated, the short half-life of GHRP-2 is a real hurdle and has dissuaded many bodybuilders, including myself, from using it.

However, if you do want to buy pure and high-quality GHRP-2, you should check out my recommended list of peptide vendors.

They have independent third-party laboratories vetting their GHRP-2 and are generally a pleasure to deal with.

To be completely honest with you, I’m not that impressed with GHRP-2.

For someone that has a very active lifestyle, it’s a logistical nightmare to have to inject every couple hours.

I hope this impartial GHRP-2 review has shown you the true colors of this compound!