RAD 140 Cardarine Stack | What Results Should You Expect

This is an advanced stack mostly practiced by bodybuilders that have been in the game for years and who know their way around SARMs and compounds similar to them, like Cardarine.

That doesn’t necessarily have to exclude you from the awesome benefits this stack brings to the table, but you do have to learn how to properly utilize it. 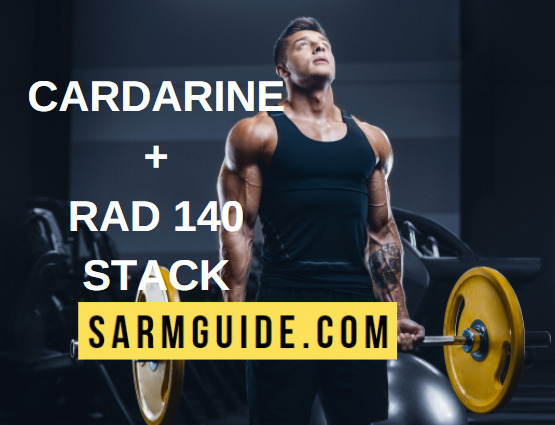 The first thing to keep in mind is that this stack might require PCT, as RAD 140 can be quite suppressive of your natural Testosterone levels.

Another thing to pay attention to is the fact that you can either bulk or cut with this stack, meaning that it’s up to you as to what kind of results you can expect.

Please note that dosages are going to be a bit different, respective of the body you’re trying to go for.

If you’re cutting with RAD 140 and Cardarine, this is what your dosages and cycles length should look like:

This stack ensures that you get the proper amount of RAD 140 and Cardarine needed to get that fat loss going, without overdoing it.

As you can see, PCT will most likely not be required as your body will naturally recover from the strain RAD 140 puts it under.

On the other hand, if you’re bulking, you will want to take a bit more RAD 140 and Cardarine.

Please take a look at the table below:

I only recommend this stack to bodybuilders that have been around suppressive SARMs, as it is very likely that you will in fact need PCT for this combination thanks to RAD 140.

Not only will you build a substantial amount of muscle with this stack, but you will also lose fat, which is great if you’re body recomping.

Going over eight weeks or taking more than what is prescribed only leads to disappointment as you will not see quicker results, but rather exacerbate the potential side effects of this stack.

What results should you expect

If you’re cutting, not only will you gain around two to three pounds of lean muscle, but you will also lose quite a lot of fat.

I’ve personally been under this stack and have managed to reduce my body fat percentage from a pudgy 20% to a respectable 10%, all in just eight weeks. Cardarine was crucial for this to happen, as it gave me the endurance necessary to perform well at cardio.

RAD 140 will ensure that you experience an increase in strength, but don’t expect too much power as you’re on a caloric deficit.

I personally didn’t manage to break any records at the big three in the gym.

Vascularity was way more pronounced, and it made me feel manly both inside and outside of the gym, which was awesome.

Let’s not forget that I’ve also lost quite a bit of weight, which made me look even leaner!

On the flip side, if you’re bulking, you can expect to gain around ten pounds of muscle mass and lose up to 4% of your total body fat in the gym.

Don’t think that you will get the same kind of vascularity as you would if you were cutting, but it’s still going to be there, and you will feel it.

If you’re after personal records, this is where you should be, as I’ve managed to improve my deadlift, squat and bench press by at least twenty pounds while on a bulk with RAD 140 and Cardarine.

Lastly, expect to gain a few pounds on the weight scale, it’s not going to be anything scary, as you will mostly be putting on new muscle.

There are many different types of suppression, ranging from mild to heavy, which is something you have to take into account whilst consuming this stack.

If you’re cutting, you will be taking less RAD 140, which means that it’s very likely that you won’t experience more than mild suppression during your cycle.

On the other side of the coin, if you’re bulking, you will be subjecting your body to 10mgs of RAD 140 every day, which might lead to heavier suppression to be experienced.

You will feel side effects such as lethargy, depression and mood swings up to a month from your last dosage.

After that, these side effects usually go away.

You can thank RAD 140 for this one. I remember doing an eight week log on RAD 140 and the irritability and aggression experienced were quite frustrating.

The only way to mitigate this side effect is to preemptively recognize the fact that you will be a bit cranky and that those feelings are not natural but caused by RAD 140 consumption.

This side effect ceases to bother you as soon as you stop taking the stack.

I personally never take Cardarine without liver support nearby. Although PPAR delta agonists like Cardarine are usually seen as benign to the liver, with the latter, the opposite is the case.

That’s why something like milk thistle goes a long way to protect your body from any increases in your liver enzymes, i.e. liver damage.

As previously mentioned, if you’re cutting, you will not need PCT and I wouldn’t really put much thought into it.

Conversely, during a bulk, I would have some Nolvadex or Clomid nearby just in case things go awry.

I didn’t feel the need to take PCT while on this stack, but I still advise you to err on the side of caution while bulking, as 10mgs a day can be quite suppressive.

In the end, it will all depend on your genetics and how well your body tolerates RAD 140, which is mostly out of your control.

This is a great stack for bodybuilders that are after a body recomp.

As we all should know, body recomping is one of the most difficult feats to accomplish in bodybuilding and this stack can definitely help you out with that.

Make sure to acquaint yourself with the compounds you’re about to consume and remember that it takes time to see results.

Be patient and you will do just fine!