In this article, we’ll learn what SARMs pose the biggest threat to your liver, which ones are safe to use and the types of liver support you can use if you’re at risk.

For the purposes of this write-up, we’ll also be including MK-677, Cardarine and SR9009 into the fray, as they are commonly used and stacked with SARMs. 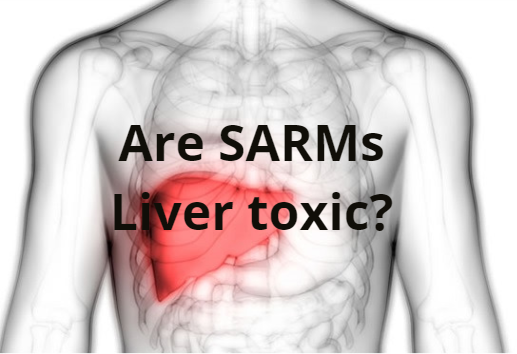 Many fledglings to SARMs are concerned whether SARMs are hepatotoxic, i.e. are they damaging liver cells and potentially, the entire organ?

That is a very good question, with many pundits disagreeing over what the right answer is, as there are so many conflicting reports.

From what I’ve gathered, if you’re a normal, healthy male between the ages of 18 and 65, some of your liver enzymes will experience an increase while taking certain SARMs, but they will not cause liver damage, nor will you experience any negative signs or symptoms.

They will be transient in nature – Your liver hormones will start returning to baseline levels the moment your cycle ends.

This means that if you’re someone with no medical problems whatsoever, this article is a bit redundant to you, as you can use SARMs without experiencing any side effects to the liver.

Still, I urge you to continue reading, as even amongst normal, healthy males, a small subset exists which reacts adversely to SARMs and as I always like to say; a stitch in time saves nine.

ALT (Alanine Transaminase) and AST (aspartate aminotransferase) are two liver enzymes released into the blood stream once your liver gets damaged. They are important markers that let us determine just how much your liver is suffering at any given time.

The ratio between these two hormones should always be 4:5 in favor of ALT.

Many people are oblivious to the fact that alcohol causes ALT and AST levels to spike and that it can cause serious liver damage.

Speaking of alcohol, I have a whole guide on the relationship between SARMs and alcohol, so I suggest you go check it out.

Types And Causes of Liver Toxicity

Before we delve into SARMs and the liver, let’s explore the relationship between the liver and the foreign substances that enter it.

There are three main ways drugs can cause liver toxicity:

If you take too much of the drug in question, your liver simply can’t purify all the harmful substances in them, causing them to create chaos in the liver.

This is why when taking SARMs, you should always strive for the lowest dosages possible, as most SARMs have studies confirming that they work well in really low dosages, with Ligandrol being an example.

This is so rare that it is barely worth mentioning, happens in about 1 in 100000 cases. Your liver simply fails to purify the drug in question, causing accumulation and toxicity in the liver.

This is also quite rare, and it happens when the immune system starts attacking the drug in question, which causes inflammation in the liver since the battle is happening there.

Speaking of inflammation, another probable cause of liver toxicity is exactly the strain we experience when training hard with SARMs.

In normal cases, you would expect exercise to reduce fatty acids in the liver, as shown by this study, but speaking from experience, once the pump hits you in the gym with something like RAD 140, it’s hard to stop.

That’s why it’s important to limit our gym time while on SARMs, as to reduce the risk of experiencing inflammation in the liver.

When marathon runners measure their ALT and AST levels before and after a run, they often find increased levels of both hormones after the run, but they quickly return to normal after a few days.

This means that besides drugs, inflammation from rigorous exercise can also cause your liver enzymes to flare up.

The biggest sign of liver toxicity you have to watch out for is jaundice, which is a condition where your skin and the whites of your eyes turn yellow. Spooky stuff!

Loss of appetite and fatigue are also two symptoms you should look out for, but jaundice remains the biggest marker of liver disease.

Now that we have three probable causes of liver damage (alcohol, high dosages of SARMs and high-intensity training) which we can influence, let’s look at the one cause we can’t have an influence on, the SARMs themselves.

Some of them are liver toxic, others barely touch the liver. Let’s explore them one by one, so that we can always be prepared for the worst-case scenario.

When you hear about the Ostarine, the first couple of words that come to mind are ‘mild’, ‘beginner-friendly’, ‘weak’…

It comes as an unwelcomed surprise than when one realizes that Ostarine is actually liver toxic, especially at higher dosages.

A study conducted on 120 patients, separated by dosage in five groups (0,1mg, 0,3mg, 1mg, 3mg and placebo) showed that eight of the subjects experienced elevated ALT and AST levels. The placebo group showed no signs of elevated liver enzymes, meaning that Ostarine was the cause of it.

One participant had to quit the study (3mg dosage) as his ALT levels became way too high, but the researchers stated that ‘’…the ALT elevation was not considered a serious adverse event.’’

The other seven remained in the study, as their ALT/ALS levels weren’t significantly impacted.

Considering the fact that many bodybuilders take as much as ten times the dosage, you should be really careful when imbuing Ostarine. I don’t recommend you take more than 10mgs a day for the first time, since you have no idea how Ostarine will interact with your liver.

As controversial as it sounds, do your blood work before and after taking Ostarine!

A study has shown that Ligandrol didn’t cause any ALT or ALS elevation in the liver in dosages of 1mg. The problem with this study was that it was only conducted for three weeks and that the dosage was very low. Bodybuilders usually cycle it for eight weeks.

Still, it’s the only source we can work with, so we should trust it.

Since Ligandrol is effective in low dosages, there is never a reason to take more than 5mgs a day.

This also avoids the need for PCT, which has side effects of its own, so you should stick to this dosage.

Bro-science will tell you that RAD 140 is not liver toxic and that there is nothing to worry about. Anecdotal evidence and blood work done by bodybuilders also supports this notion.

This may apply to most people out there, but reports like these shine light onto what can happen if you have an adverse reaction to RAD 140.

A 49-year-old male exhibited jaundice on just a four-week cycle with Testolone. He didn’t drink any alcohol, but did use an antidepressant, which might have contributed to his liver deterioration.

He recovered a year after the report was made without any significant damage to the liver.

From this study, we can conclude that in 99% of the population, RAD 140 will not cause liver damage, but still, to be completely safe, take blood work before and after your Testolone cycle! It will also provide you with insight into your Testosterone levels, which will help you determine whether you need PCT or not.

There are zero reports of Andarine causing elevated enzyme levels in the liver, still, be careful with your S4 dosage, as it can cause other side effects at higher dosages.

Besides being a myostatin inhibitor, YK-11 is also an acid methyl ester. Given that its skeletal structure suggests that it contains a lot of methylated groups, one can ascertain that there is a medium to high chance of it causing liver toxicity.

There is no human data insofar and the safest way to approach YK-11 is to take a low dosage and get your blood work done. Also, have liver support nearby, you might need it.

There are currently no studies concerning themselves with S23 and liver toxicity. Although it is the strongest SARM in existence, it should technically be weaker on the liver compared to YK-11, since it doesn’t have as many methylated groups.

Don’t listen to bro-science telling you that SARMs aren’t liver toxic and do a blood test before and after your S23 cycle.

Ibutamoren is safe to use and is not toxic to the liver at all. It’s actually not a SARM, it’s a growth hormone secretagogue. It doesn’t stay long enough in the liver to cause any damage since it quickly gets absorbed, crossing the blood-brain barrier and acting as a neuropeptide there.

PPAR-delta agonists usually enjoy a good reputation when it comes to the liver, as they can help protect it from injury, but not Cardarine.

A study featuring two PPAR-delta agonists, KD3010 and Cardarine showed that the first one dramatically soothed the effects of liver damage. And what about Cardarine?

It had an adverse effect on the liver, increasing liver fibrosis.

This means that one shouldn’t take Cardarine without liver support and obviously, you have to get your bloods done.

Finally some good news on this list, a short study lasting two weeks has shown that SR9009 decreased liver fibrosis in mice.

Also, another report where mice were given SR9009 for seven weeks showed no signs of increased liver enzymes.

This leads me to presume that you don’t need to worry about liver damage when consuming Stenabolic.

To conclude this section, the SARMs/compounds that you should be careful with are: Ostarine, YK11 and Cardarine. Take them in low dosages, consume liver support while taking them and get your bloods done!

The ones I’m unsure about are: Testolone, Ligandrol, Andarine and S23. It’s best you get a blood test done with them and have some liver support prepared, so you’re prepared for the worst-case scenario.

You’ll be completely safe and won’t have to worry about liver toxicity with MK 677 and SR9009.

Liver support is a colloquial phrase for supplements that help keep liver enzymes in check or generally help with the running order of the liver.

My biggest recommendation goes out to TUDCA, also known as Tauroursodeoxycholic acid.

Numerous studies have found it to be effective in reducing both AST and ALT levels.

An analysis I want to present concerned itself with 27 patients suffering from hepatitis, where TUDCA managed to lower enzyme levels by up to 50% in just three months of active usage.

This means that we can take TUDCA alongside with SARMs toxic to the liver and prevent the increase of ALT and AST levels at the same time.

The recommended dosage is 500mgs a day for the entirety of your cycle.

If you want to go natural, I recommend milk thistle as it has actual science behind its efficaciousness.

Milk thistle is a plant that improves liver functioning through something called silymarin, its main active ingredient.

Although only studies on mice confirmed that milk thistle decreased inflammation in the liver, there are a lot of reports stating that it worked wonders on liver damage.

The normal dosage is two pills a day and you should take them as long as your SARM cycle lasts.

In conclusion, some SARMs are more liver toxic than others. It’s important to get blood work done and have milk thistle or TUDCA by your side, especially if you’re using SARMs that pose a risk to your liver.

The chances of you experiencing liver disease from any of the SARMs and other compounds presented are very slim, but I still wanted you to be up to date with the latest science concerning liver damage and SARMs, so that you can decide for yourself if SARMs are something you want to indulge in.