Strong interest has been shown in this peptide, piquing the minds of ordinary people, budding bodybuilders and even top-performing athletes! 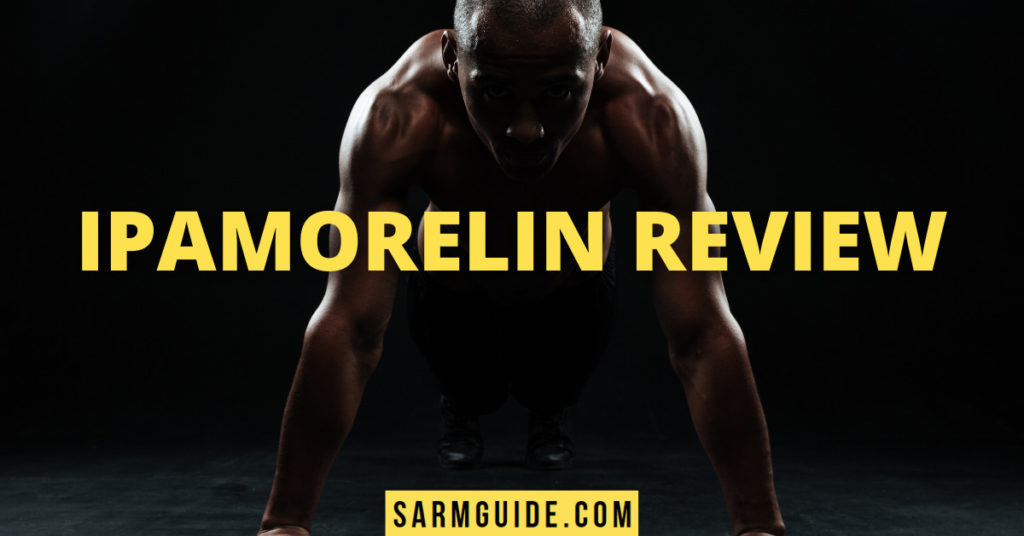 This Ipamorelin review will do a deep dive on this selective growth hormone secretagogue, showing you exactly:

Read on to find out why thousands of people every year decide to start taking this peptide.

Since the dawn of science, researchers were always looking for ways to produce compounds that will exert positive effects while minimizing side effects subjects experience upon consumption.

It’s one of the founding stones of science but compounds with the above characteristics are very rare.

Moreover, it’s miles better than any known GHRP till date; it does the job of a GHRP more effectively and with less side effects!

Its selective nature ensures that it doesn’t harm any other organs in the body, such as the liver, and it very much reminds us of SARMs, who are also selective in their mechanism of action.

This makes it the safest peptide till this date!

First and foremost, Ipamorelin is a ghrelin mimetic, which means that it increases its levels in the body.

When people hear the word ghrelin, the first thing they think of is increased hunger, a very known side effect of ghrelin abundance.

However, as we’ll see in the benefits section below, ghrelin is much more than just a hunger hormone and exerts many important functions in the body.

Its second mechanism of action entails the release of GH into the body, which produces a myriad of benefits.

It does so through binding to GHRF (growth hormone releasing factor), also known as somatocrinin.

Last but not least, it hinders somatostatin levels in the body, which are responsible for the inhibition of GH.

This leads to an even bigger increase in GH levels in the body!

Ipamorelin and many other peptides have not been approved for human consumption by the FDA.

Human research exists but is limited and more time needs to pass before this peptide gets the approval it deserves.

You can buy Ipamorelin legally but strictly for research purposes, not for human consumption.

Vendors who’ve misbranded Ipamorelin in the past faced heavy fines and even prison time, as evidenced by the Smith case in 2016.

Don’t buy Ipamorelin for anything but research purposes and don’t buy from vendors that brand it as eligible for human consumption.

There is no need to worry, by the end of this article, we’ll show you a list of legitimate vendors that sell the purest Ipamorelin, exclusively for research purposes!

Ghrelin mimetics are completely banned by the WADA under section ‘S2 (2.3)’ and as an athlete, you are not allowed to use Ipamorelin.

Failure to comply with this rule will get you banned from active participation in tournaments, leagues, contests, competitions, etc.

It might also retroactively cause you to lose out on any accomplishments you’ve made in the past.

For brevity’s sake, just stay away from Ipamorelin and other peptides if you’re actively competing.

Drug tests are common and the WADA hands them out frequently and without mercy, so don’t play with fire.

Since Ipamorelin selectively targets GH receptors in the body, it produces a wide range of potent effects.

Let’s explore some of them!

If you’re someone struggling to put on an extra few pounds no matter how hard you’re trying to bulk, Ipamorelin is the peptide for you.

It increases ghrelin production which induces hunger, making you eat more frequently and in higher quantities.

According to a study performed on rats, administration of both Ipamorelin and GHRP-6 showed no marked increase in food intake or bodyweight after the first shot.

However, when Ipamorelin alone was administered multiple times, the rats ate a lot more, had more bowel movements and gained body weight.

Even if you’re not a bodybuilder, bone health is associated with higher resistance to fractures, stronger muscles (according to a study on women) and bigger overall strength.

As you age, your bones degenerate and expose you to a plethora of unpleasant side effects.

Luckily, a study confirmed what was speculated for very long; Ipamorelin increased bone density and strength in rats lacking glucocorticoids, which are basically the body’s natural anti-inflammatory agents.

Remember when we mentioned that ghrelin wasn’t just a hunger hormone?

According to research, ghrelin decreases the risk of heart attacks (the number one killer in the US) and it also prevents muscle thinning.

Say you’re sick and bed bound for a week or even a month and can’t go to the gym; Ipamorelin prevents muscle loss and muscle wasting.

Some researchers see it as a potential treatment option for osteoporosis but studies on this matter are lacking.

If there’s anything adult humans can’t get enough of, it’s sleep.

We’re chronically deprived of it, be it because of all the blue light from our surrounding technology or our hectic and stress-filled lifestyles.

Good sleep helps with the formation of muscle mass, reduces body fat and brings a lot more benefits to the table.

GH not only helps you fall asleep faster but improves sleep quality, which leads to mornings where you wake up feeling refreshed and ready to seize the day!

Since human studies are almost non-existent when it comes to Ipamorelin, we’ll mostly rely on one Phase II study that researched the effects of this peptide in bowel resection patients.

The trial lasted only seven days, with two injections being administered, on the first and last day of the study.

A dosage of 0.03mg per kg of body weight was used and by the end of the study, the scientists found Ipamorelin to be ‘well-tolerated’ among all 114 patients.

Using this study as a reference, a person weighing 80kgs should imbue 2,4mgs of Ipamorelin per week, just as in the study.

Ipamorelin was considered safe by the scientists, so you shouldn’t expect many side effects while using the dosage above.

However, anecdotal reports of bodybuilders who took more than 0.03mg per kg of body weight claim to have experienced some adverse effects. More on that later.

We recommend sticking to the dosages as outlined in the study above, as it’s both a safe and effective dosage.

Long-term Ipamorelin usage hasn’t been studied in humans, so we can’t say for sure if its continual consumption would lead to problems down the road.

Most people using Ipamorelin recreationally cycle it every two to three months; they take it for eight to twelve weeks and stop usage for at least four weeks.

One reason Ipamorelin is cycled is because of decreased responsiveness to the peptide. Basically, your anterior pituitary cells get desensitized to the effects of the compound.

To prevent this, a tolerance break is necessary!

Ipamorelin has a half-life of only two hours.

Some people might get the wrong idea and think that bihourly injections would be necessary to notice any benefits from this peptide.

The reason why it’s eliminated from the body at such a rapid rate is that it turns into GH and ghrelin almost as soon as it’s administered.

Both of these hormones stay elevated in the body for up to seven days after an Ipamorelin injection, so taking it more than once a week is completely unnecessary!

The one human study mentioned in the ‘dosage’ section is simply not enough to gouge all the adverse effects of Ipamorelin.

Yes, scientists gave this peptide the green light and didn’t notice any side effects but the study only lasted seven days!

Anecdotal reports from bodybuilders paint a different story and here is what they had to say about the side effects they experienced while on this peptide.

Hypertension (high blood pressure) is the most common complaint by people taking Ipamorelin.

Supposedly, after a three-month cycle, you can expect an increase of up to 20 mmHg.

Luckily, this is a rare side effect and only about 10% of people taking Ipamorelin ever get to experience it.

However, if you have had problems with blood pressure regulation in the past, we suggest moving on to another peptide.

If you’re injecting Ipamorelin, reports of side effects such as swelling, redness around the area of injection and even rashes aren’t that uncommon.

Most of the time, it’s due to the inexperience of the person administering the peptide and has nothing to do with Ipamorelin as a compound.

Some people enjoy the ‘floaty’ feeling they get after administering Ipamorelin, others get scared.

This is a common side effect and goes away in less than 30 minutes after taking Ipamorelin.

You don’t have to do anything special, just ensure that you’re either sitting or lying down so you don’t accidentally injure yourself.

Other very rare side effects such as water retention and fever have been reported.

They shouldn’t be a concern to someone sticking to our dosage guidelines, as the two side effects mentioned above are a result of Ipamorelin overconsumption.

Where to Buy Ipamorelin

There are a lot of bunk peptides on the market these days and if you don’t know your onions, you’ll be lost in the deep sea of countless online vendors.

Many users have reported underdosed and overpriced Ipamorelin, lack of transparency by peptide companies and a fundamental problem with shipping and delivery.

To prevent that from happening to you, we have assembled a list of the best peptide vendors on the internet.

They test their Ipamorelin in independent third-party laboratories, post their lab results publicly and most importantly, they respect you as a customer.

We never had an issue getting our research chemicals from the companies on our list and neither will you!

One problem with many peptides these days, including Ipamorelin, is the lack of long-term human research.

Put simply, there isn’t enough funding for peptide research in the scientific community.

We hope to see that change in the future, as this Ipamorelin review has shown us that a selective GH secretagogue such as this one deserves way more recognition!